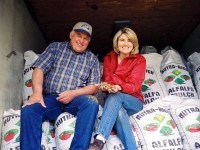 COKATO, MN – Alfalfa, the legendary character from “Little Rascals” is back and he has a secret! It’s Alfalfa’s Secret the news, coolest, greenest soil enhancer that is a must-have for every gardener. Alfalfa’s Secret is the secret ingredient for improving the soil making it healthier. Made from pure alfalfa, Alfalfa’s Secret builds soil fertility naturally with a season-long release of nutrients, particularly nitrogen, phosphorus and potassium.

Sporting his iconic cowlick with his best buddy Alfalfa and Spanky, the two are poised on every bag of a new soil enhancer that is getting rave reviews. Use Alfalfa’s Secret as a mulch to feed plants, enrich soil, retain moisture while helping to keep weeds away. Incorporate it into the soil in the fall as a soil amendment to build healthy soil for the next growing season.

In addition to being natural, grown and packaged on Midwestern farms, a significant advantage to gardeners is the product’s cleanliness. Rebecca Kolls, host of HGTV’s “Rebecca’s Garden” and publisher of Rebecca Kolls’ Seasons magazine doesn’t garden without Alfalfa’s Secret, “We use alfalfa in ‘Rebecca’s Garden’ as an organic amendment. The results are a blooming success. Plus it’s clean and smells fresh, I love it!”

Alfalfa’s Secret builds soil fertility naturally with a season long release of nutrients. For generations, farmers used the alfalfa plant as a primary source of nitrogen for crops before the advent of commercial fertilizers. The alfalfa plant also carries a full complement of minerals needed by growing plants. Early farmers referred to alfalfa as “green manure” as it was tilled into their fields.

Retailers having a positive experience with Alfalfa’s Secret during the 2009 season include Otten Bros., Gertens garden centers in Minnesota.

Alfalfa’s Secret is a natural, renewable crop raised, processed and packaged on a fifth generation family farm in rural Cokato, Minnesota. The farm is focused on sustainability and conservation of the soil and environment.  Click for more from Rebecca’s Garden

Look for “Little Rascals” character on every Alfalfa’s Secret bag

View all posts by: Alfalfa Secret