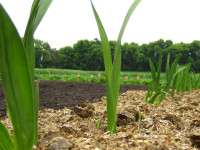 When and How To Use
Alfalfa’s Secret

Early in the season or at the end of the season, Alfalfa’s Secret can be added and mixed into the soil throughout the root zone as a soil amendment. Depending on the fertility level of the soil being prepared, one to three inches can be mixed in the top 1-6 inches of garden soil. When preparing a new site for a garden, the higher end levels should be used. Once the desirable soil fertility levels have been attained, less product will be needed to sustain a successful garden.

It can be applied topically on the ground under and between the growing plants. This should be done after the soil temperature reaches 60 degrees F., generally about the first part of June in Minnesota. It is advisable to till any newly growing weeds before applying. An application of about 1 inch of Alfalfa’s Secret should result in a reduction in weed pressure. At the end of the growing season the original application and some extra application should be tilled into the soil for the benefit of the following growing season.

Continued use of Alfalfa’s Secret topically or incorporated will build up the soil’s organic matter. In sandy soils, this will help to hold moisture in the root zone of your garden. In hard clay soils, it will reduce the run-off of rain water and allow rain water to properly soak into the root zone.

Alfalfa’s Secret can be mixed with soils that are going to be used to backfill the planting of potted plants. The amount of mix will depend on the quality of the soil fertility that is being used as a backfill soil. A common starting point would be to mix three parts of backfill soil to one part Alfalfa’s Secret.

Alfalfa’s Secret can be mixed with your composting material. The extra Nitrogen will speed up the composting process and results in a more nutritious material for your growing plants later. It will be especially beneficial when composting tree leaves in the fall of the year.

Gardeners also need to keep in mind that the nutrients in Alfalfa’s Secret feed the community of micro-organisms that are living in the soil of a healthy garden in addition to supplying the needed nutrients to your growing plants.

Gardeners will see many improvements to their growing garden when using Alfalfa’s Secret.

Soon after surface applying Alfalfa’s Secret, the product will bleach to a light tan color. This will reflect some of the sun’s energy and help to keep the soil temperatures cooler in the hot part of the summer.

Undesirable plants, also known to many as weeds, will be discouraged from growing out from under the cover of Alfalfa’s Secret.

The ability of Alfalfa’s Secret to slowly release the plant nutrients will give your plants a healthy diet all season long. It is not harmful to apply additional product later in the growing season.

For above ground growing vegetables like tomatoes, the mat of Alfalfa’s Secret will create a barrier so that soil born diseases like ‘blithe’ will not splash up on your production.

Alfalfa’s Secret is rich in natural sugars. When surface applied to a rose garden, these sugars will breakdown and release an alcohol called triacotanol. This has been found to be of significant benefit to the development of beautiful roses and encourages the rose plant to express themselves more.

A successful mat of Alfalfa’s Secret will draw moisture from deeper in the soil and will also protect the needed moisture from being lost into the air on hot sunny days.

Because Alfalfa’s Secret is processed, it will cling to the soil and not blow away especially after a good rain.

After a good rain, the mat of Alfalfa’s Secret will be easier to walk on rather than walking on sticky soils.

Alfalfa’s Secret is a safe product for gardeners to use.