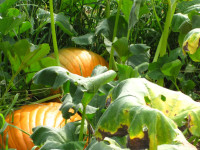 Alfalfa is the most natural source of Nitrogen for today’s gardener. The mineral content of alfalfa is more than just Nitrogen and the traditional commercial fertilizer’s Nitrogen, Phosphorus and Potash (Potassium). Alfalfa offers a complete diet of minerals that also includes Calcium, Sulfur, Magnesium, Boron, Iron, Zinc and others.

Many of the organic materials that are incorporated into our gardens require extra nitrogen to balance the Carbon/Nitrogen ratio (30:1) that is required to decompose the organic matter. Alfalfa brings excess Nitrogen to break down organic matter as well as extra Nitrogen that will be available for the plants to use to grow. Nitrogen needs to be resupplied each growing season.

Successful crop farmers would grow alfalfa or clover (Legumes) in their fields and plow it into the soil at the end of the growing season for Nitrogen before the time of commercial fertilizers. It was called “Green Manure” in the early days. Legumes have the ability to fix Nitrogen to the growing foliage and roots taken from the air naturally. Alfalfa is a very nutritious plant for the garden plants as well as livestock.

Alfalfa is one of the most environmentally friendly crops raised by today’s farmer. It is a perennial crop that only requires soil to be tilled every 5-10 years. It requires very little commercial fertilizer or pesticides to be grown successfully. Production of alfalfa requires significantly less energy than do the traditional cereal grain crops. Alfalfa growers do not receive government subsidies for growing alfalfa. Alfalfa is truly a renewable ‘green’ crop.